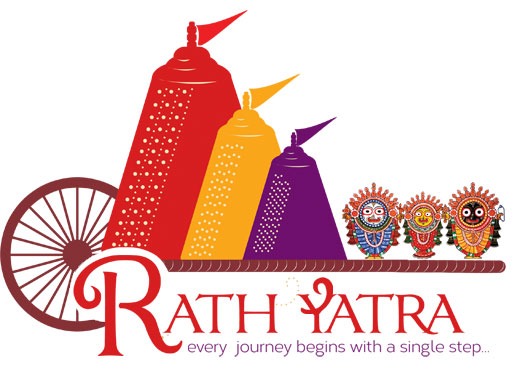 Rath yatra is a major festival of the Hindus which commemorates the annual visit of Lord Jagannath to Gundicha Mata’s temple, his birthplace and aunt’s home along with his elder brother Balabhadra and sister Subhadra. This is one of the rare festivals that involves moving deities Jagannath, Balabhadra, Subhadra and Sudarshana on a chariot (called a ratha). In Sanskrit, Ratha means ” chariot “, and Yatra means “journey”;  so this annual procession  of the deity’s idols is also known as ‘ Chariot Festival ’.

The Rath Yatra festival is the only occasion when non-Hindu devotees, who aren’t allowed inside the temple, can get their glimpse of the deities. This festival symbolizes that god considers every one equally. This is proved when we see people from every religious belief attending the ceremony. And even the Raja (King Gajapati) wears the outfit of a sweeper and sweeps all around the deities and chariots in the Chera Pahara (a ritual sweeping with water). The Gajapati King cleanses the road before the chariots with a gold-handled broom and sprinkles sandalwood water and powder with utmost devotion. This ritual signified that under the lordship of Jagannath, there is no distinction between the powerful sovereign Gajapati King and the most humble devote.

Sri Jagannath is believed by the Hindus to be an incarnation of Lord Vishnu and Lord Krishna, and also one among the Holy Hindu Trinity of Gods (Brahma the creator, Vishnu the preserver, and Shiva the destroyer). In the occasion of Ratha Yatra, the three deities i.e., Lord Jagannath, Balarama and Subhadra are taken from the Jagannath Temple in the chariots to the Gundicha Temple, where they stay for seven days. Thereafter, the deities again ride the chariots back to Shri Mandir in ‘bahuda yatra’. On the way back, from the Mausi Maa Temple or Gundicha Temple the deities are offered Poda Pitha, a kind of baked cake and a nourishing drink which are generally consumed by the poor sections only.

An interesting fact about the God is that the idol of Lord Jagannath doesn’t have any arms and legs. Apparently a popular belief says that, it was carved out of wood by a carpenter after the Lord came to the King in a dream, and instructed him to get the idol made. If anyone saw the idol before it was finished, the work would not progress any further. According to the kings instructions the idol was being made in a covered place and was not allowed to interrupt at any cost. Unfortunately the King himself became impatient and in extreme curiosity he took a peek, and from then the idol remains incomplete. Popularly it is believed that Jagannath’s imperfection expresses the imperfection enshrouded all around us, and that it’s a reminder to be kind to those who are different to us.

The festival of Rath Yatra is followed in many places in India and abroad but the biggest being the one celebrated in Orissa and the second largest celebration takes place in Bengal. It is been celebrated here since 1396 A.D. It is a month-long festival held at Mahesh in Serampore of West Bengal and a grand fair is held at that time. People throng to have a share in pulling the long ropes (Rasshi) attached to the chariots of Lord Jagannath, Balarama and Subhadra on the journey from the Shri temple to Gundicha Bari (Masir bari) and back.

It is a good time for the young ones who enjoy by pulling small chariots with idols of the three deities, in their locality. Their family initially organizes a puja ceremony for the idols and then they are placed on the chariots to be pulled by the youngest member of the family. It is a ceremony that spreads peace and harmony among people.

Real Life Hero – Be A Hero