“There is no shape more terrible than this —

More tongued with censure of the world’s blind greed —

More filled with signs and portents for the soul —

More fraught with menace to the universe.”

These words, written way back in 1898 by Edwin Markham, unsurprisingly, are no less relevant in this century. Aptly called “the battle cry of the next thousand years”, the poem “The Man with the hoe” vividly portrays the pathos of the laborers across the globe. However, the painful fact is that in the daily rush of our lives we have somehow locked up our humanity in a rock-solid chest and have thrown away the same in an ocean of materialism. No matter what the depth of the ocean is and regardless of the thickness of the chest, we possess the ability to retrieve the locked up emotions. 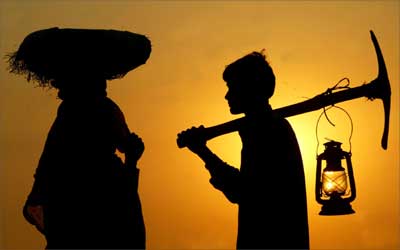 May 1, as most of us know, is a national public holiday in India. For young kids, it’s a day off from the school. For the business tycoons, it is a wasteful day contributing to the losses. For the political parties, it’s a day to celebrate laborers so as to add more votes to their kitties. Isn’t something amiss in what you read just now? What about the laborers? Is this day really observed as a holiday or the wheels of labor continue rolling out on this day? What is the reason behind this so-called holiday?

Also known as May Day, May 1 is officially celebrated as The International Workers’ Day in more than 80 nations. Since 1886, this day has witnessed numerous significant events but the crux remains in the unjust oppression of the laborers. Man has always been rapacious for power. From animals to human beings, Man has tamed all. When these weaklings endeavored to flap their wings and come out from theshell of atrocities, there were many “revolts” and “revolutions”. The workers who had assembled, in Chicago, in the year 1886, to demand an “Eight-hour workday” were ruthlessly made the easy target of bullets. International Workers’ Day is celebrated to commemorate this unfortunate event.

After a few snapshots of the history, let us travel to the present scene. In India, there prevail more than half a century of labor laws and the number of pending litigations would be somewhat in lacs, I suppose. The thoughtful question here is whether such acts cover all the laborers of the country. To our utter dismay, 94 percent of the Indian working population is a part of the unorganized sector which is not identified under these acts. Leave the acts apart; do we even identify the laborers around us??

A Government Report classified the unorganized labor into four categories- on the basis of occupation, the nature of employment, especially distressed categories and service categories. Many of us would be surprised to know that the last 2 categories include scavengers, household servants, midwives, load carriers, barbers, fruits and vegetables vendors, hawkers, milkmen. Did you just hear a bell ringing in your minds? A bell of realization? Indeed you are right; these are the people who play such an important role in making our daily lives comfortable but again how many of us really acknowledge them for their services. The power of money has subjugated all our feelings towards this category of workers. We, the slaves of money, feel that we have every right on these people, including the right to misbehave.

In India, women security is a burning issue. We talk of sexual harassment in the corporate world. We talk of heinous rapes in the metropolitans. Some glistening celebrities molest their household maids for momentary pleasure and when dragged to the court, they spend big bucks to prove it to be a case of blackmail (of course, we know who gets blackmailed). What about the mental molestation of all these workers? The wrong done cannot be undone but the thing that we should bear in our minds is that the wrong done to one affects all. It is very much like burning one tree in the forest where it passes the fire to the other trees. We are eager to spend thousands for our luxury but we don’t have enough to spare when these people need some extra amount. We, the bureaucrats, will spend millions on charity but not an extra penny for them. Only legal obligations can bound us to pay them the fair pay. Some of us will be grateful to the Government on knowing that the minimum monthly pay in India is merely USD 90 as compared to China’s USD 182.5. However, the chasm between the rich and the poor is broadening every moment. The rich are getting richer because their victims are quietly enduring the injustice done to them.