Autumn is the festive season for Indians because of Durga Puja and Diwali. It is an important sociocultural annual religious festival observed by Hindus from ancient times by worshiping the goddess Durga. Hindu scriptures depict Durga as a warrior goddess against the mythological demon named Mahishasura.
Devi Durga carries different weapons in her ten arms and rides on a lion. Her appear is also interpreted as an embodiment of feminine power in Indian culture and society.
Though Durga Puja is observed widely across India, it is the main festival of West Bengal, the eastern part of India. The cynosure of this festival are the idols of Devi Durga and her family hand crafted from bio-degradable materials, in a traditional way.
The six days festival also includes various sociocultural events and performances to provide meaningful entertainments for the audience. The events will aim to engage participants from across age group, cultural backgrounds and abilities.
Bengali’s from the state of West Bengal migrated to the UK from early 60s and contributed as doctors, engineers and other skilled workers. They bought Maa(“mother” in Bengali we called Maa) Durga with the and Durga Puja is celebrated all over UK with much gusto and enthusiasm.
There are many pujas happened every year in London. One of the biggest Durga Pujas takes place at the Ealing town hall, west London. Organized by London Sharad utsav committee this puja has gained in popularity over thye last few years, to be one of the biggest held Duga puja outside the sub-continent.

In 2011 they organized what they called global Durga puja, whereby they showed live, the Durga pujas of Kolkata, directly at their venue. Ealing Durga Puja committee also organized the Kumari puja, which is the ritual of worshiping a small girl as Devi Durga.
Another big Durga Puja in London takes place at Camden center. This Puja is has been held here for last 50 years. The patron of this puja committee is Mr. Lakshmi Mittal, London based Indian steel magnate.

Bengali’s of London makes this puja very pleasant for all the viewers. They arranged beautiful cultural programs during these four days. They also arranged a grand Bijaya Sommelani (the last day of the festival) party which is very famous for its innovative ideas in every year.
‘Probasi’(meaning- the one who lives in another country) is a social and cultural organization based in Hounslow, London. It aspires to bring the east to west and do harness the best of both worlds.

In east London ‘Utsav’ club also arranges Puja in the Punjabi Center, Ilford. From 2006 ‘Pancamukhi’ (a Sanskrit word literally meaning five-headed, a metaphorical representation of multiple dimensions of life), a non-profit association arranges Durga Puja at Harrow Arts Center Though
Though far from our own relatives and own land, the feeling of Durga puja festival remains the same to everyone’s hearts and it also brings a piece of our own land very near. 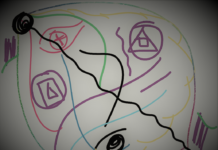