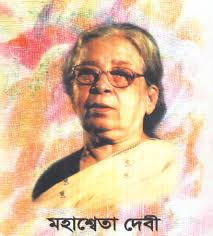 The sad demise of Mahasweta Devi has left the world of literature under void. Writing about such a personality is a prestigious work but to write in such a sadistic moment makes me feel forsaken.

Mahasweta Devi , being a noted writer-activist from Bengal, used her pen to raise awareness against social injustice, discrimination and poverty, especially against tribal and indigenous people in India. She involved herself deeply in the welfare activities of the tribal communities from early in life, and worked extensively in this area since then. Her pioneering work was about ‘Sabars’, a De-notified tribal community in the Purulia district of West Bengal, earned her the name “The Mother of the Sabars”.  This very work of Mahasweta Devi hints the way she is actually going to choose to decorate her life. This time could be marked as the expository phase of her life because after this phase, she neither looked back in life nor ever lost her dedication.

Being born in undivided India’s Dhaka, now Bangladesh in 1926 and to a lineage of intellectuals, Mahasweta Devi was inspired by her poet-writer father, the late Manish Ghatak, and her writer-cum-social activist mother, late Dharitri Devi and she is a nephew to the renowned Bengali film director Rittik Ghatak. Her husband is the great dramatist and actor Bijan Bhattachariya. Her family heritage and particularly her husband strongly influenced Mahashweta’s decision to write and pursue social work.

She completed her graduation from Visva-Bharati University and master’s degree in English from Calcutta University, and began working as a professor at the Bijoygarh College and was also a journalist. Her first book, Jhansir Rani (The Queen of Jhansi), was published in 1956; it was a result of her deep research on the tribes of Jhansi by visiting the place herself. This work also marked the beginning of her prolific literary career. She retired from her academic post in 1984 and chooses to become a full time writer.

Mahasweta Devi has been one of the boldest female writers in India. Though being counted as one among the several authors who wrote about the downtrodden, the poor, and the untouchables, Devi stood apart from the crowd with her brusque and more honest style of story-telling. Her characters would never seek pity, but demand attention.

Few of her noted stories would be Aranyer Adhikar (The Occupation of the Forest), Agnigarbha (Womb of Fire), Dhowli, Bashai Tudu, Dust on the Road, Our Non-Veg Cow, Till Death Do Us Part, Old Women, etc.

In her work we notice protests of a rebellious mind, a protest against oppression and injustice, a protest for the liberation of the most downtrodden sections of the Indian society. In an interview she expressed her view to work for the welfare of the backward classes till she breathes her last, and she did so. Her works did not went unnoticed and was recognized for her life-time contributions in both literature and social work, with the Sahitya Akademi award in 1979, the Padmashree award in 1986, the Jnanpith award in 1997, the Magsaysay award in 1997 and the Deshikottam award in 1999.

In in her lifetime has published twenty collections of short stories and close to a hundred novels, primarily in her native language of Bengali. Many of her writings including the short story Rudaali and the novel Hajar Churashir Ma (Mother of 1084, Govind Nihalini director) were made into internationally acclaimed films.

On her death, Mamata Banerjee, Chief Minister of west Bengal tweeted “India has lost a great writer. Bengal has lost a glorious mother. I have lost a personal guide. Mahasweta Di rest in peace.” Prime Minister Narendra Modi tweeted “Mahasweta Devi wonderfully illustrated the might of the pen. A voice of compassion, equality & justice, she leaves us deeply saddened. RIP.”