This is the first time Ritabhari Chakraborty and Nigel sharing screen with the veteran actress Rupa Ganguly in Satarupa Sanyal’s  Onyo Opalaa.It’s embellished with powerful performances, and has a strong storyline. The story revolves around Opalaa and her world which seems issolated, unconnected to the rest of the world. The movie is doing good business since its release despite facing various disparages. It’s Rupa Ganguly and Bhaswar’s good performances that basically holds the film together.

The narrative technique in the movie efficiently brings out the late 19th century Bengali culture and its atrocities.  Opalaa, a young and beautiful woman, married in a very tender age sees many ups and downs. She gets the shock of her life when her husband rejects her for Ananta Babaji (Nigel) and later commits suicide. Opalaa tries a lot to woo her husband and win his love but to no avail. It is later that she finds out that her husband had a physical relationship with Ananta Babaji, their family’s Guru. After a number of years pass by, Opalaa`s only son Atanu who resides in America pops up in the story on his father’s 25th death anniversary. The twist is when Ananta Babaji pays them a visit after 25 years in the same occasion. It is on this day that he requests Opalaa to let him meet Atanu at least once, but she denies. Ananta Babaji succumbs to death that night and Opalaa sets on a new journey with a revelation about her son.

The tag line of the movie “Ekti onno somporker golpo”, quite suitably portrays the factual existence of extra-marital affair but to utter surprise Satarupa pictures a gay relation which is a rare thing to see on those days. There are few more mysteries that need an answer. The entry of next generation in the movie is quite abrupt. Opalaa`s only son Atanu who resides in America never uses a cellphone, rather video chats with his US-based lover on a laptop! Why does no one notice Ananta Baba is absent from an Odissi recital, obviously held in his honour? And finally how does Pishima end up being a mute, bed-ridden invalid? Where does Pishima’s daughter pop up from?

The movie’s primary attractions are Bhaswar’s excellent effeminacies as Shyam, his chemistry with Ritabhari, despite the lack of physical love between them. Middle-aged widow Opalaa (Rupa and also Ritabhari, to portray the younger Opalaa) sustaining her inherited rural rajbari smoothly, dividing her time between household management and nostalgia, is really a great watch.  Another highlight is the music, with the strong mix of folk and classical music giving you a different trip altogether. 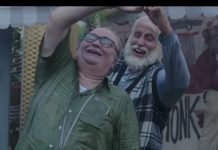