The fact that the power of mere slogans in a mob is 1000 fold effective than any organised and rational approach of creating awareness in the mob proved itself twice in my life.
First time I encountered it during the elections for a class representative in my medical school. If I am allowed to take complete liberty and narrate the incident, I would do it as follows. It all started with two candidates willing to contest. It is the rhyme in the name of one of the candidates that brought him the glory and made him the class representative of class. The elections were during the initial days of joining the professional course and nobody new each other so well to assess their nature or abilities including the to candidates who contested for the elections. The rhyme created by the mob during the time of the elections in the hostel was BABA-GABA (GABA is a medical term, gamma-Aminobutyric acid ) . As I witnessed the mob shouted, it seemed more like making fun of candidate Mr Baba Soumith. Mob soon went crazy the walls of the hostel were hit with these rhyming syllables BABA -GABA. Soon, we casted our votes and BABA was our Class Representative. Initially, he earned the title only because of this name and the slogan of his name twitched with a rhyme; later he proved to be a good organizer, earned the goodwill of all .
Second time I came across a similar incident was at National level. It was ‘Abki baar Modi Sarkar ‘ , we all know how viral the memes were during 2014 elections. The most hilarious incident was when my prankster friend called me on phone and asked “What is the circumference of a circle?” I said, “2πr”, confidently. The reply was ‘Abki bar Modi sarkar’ ! Here, we are now, living under Modi Sarkar. It is now Modi’s turn to win the people’s goodwill and lead us in making India a better place.
Its been a year since he assumed office! Most of his proposed ideas of providing us ‘acche din’ still remain only on papers. In toto, one year in office, earned NDA a title of anti-farmer and pro-corporate. This label has is slowly ebbing away the Modi wave, it is only by making his ideas come to fruition that he can keep the good will of the masses!
We, youth of India, on social media are still patient. We wish Modi in coming years will help us in putting India on the trajectory of growth and well being!

~ The Power Of Silly Slogans ~ 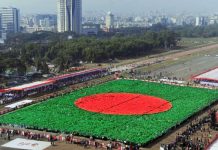