Kural is a   a village at Almora in Uttarakhand .The village is located far away from the district head quarters .It is very close to the border line of Kumaon and Garhwal divisions in the hills . Most of the villagers are farmers . Two teachers , one works in a primary school and the other in an upper primary school , a postman and a car driver are also there . The car driver lives at Pithoragarh though his family lives here  . The teacher of the upper primary school is the richest person amidst the villagers . He and the primary school teacher only live in brick built houses . He owns acres of land . It is said that a large portion of the land he has occupied unlawfully from the poor farmers . He uses to lend money to the farmers when they are in need of  loan . In many occasions they fail to repay loan in time and as a result they are forced to sell their plots of land to reimburse borrowed money which increases magically  three to four times more than the loan amount .

Ramsharan , a poor villager ,  lives with his wife and two daughters in a cottage in the village at the foot hills of the Himalayas . Both the daughters are school going . The elder one reads in class six  and the younger daughter is in class three . Everyday they walk up and down the hill almost two and half hours to reach their school . They are to risk their lives when they  cross a narrow river using a very unsteady  bamboo bridge . Two long bamboos are placed together across  the   river . In the middle they are supported by two bamboo poles tied crosswise . Another long bamboo is tied to the poles four feet high above the bridge and it runs parallel . While using the bridge one keeps balance by holding this bamboo .

In the morning Ramsharan and men like him in the village  take their children to school . In winter the river water gets frozen but during monsoon it becomes perilous and risky too . The children along with their parents keep on walking miles together without taking a little rest lest they should late for school . But when the school breaks off in the afternoon the children return home themselves .

Ramsharan has a plot of land a little behind of his cottage . He works hard  in the field and grows crops . During vacation his elder daughter helps him to do the work . He sells crops in the market and with that scanty amount of money he runs his family in acute hardship . Last year , Ramsharan could not grow crops due to heavy rain . Moreover, river water inundated land and made them homeless . Crops went under knee deep water .With his family Ramsharan took shelter on the hills and stayed there for four days almost without food and drinking water . God knows only how they saved their lives .

When the sun appeared again in the sky with all its brightness after four days and all logged water on earth went down to the river , Ramsharan dismounted and came back home with his family . They were almost dying . Incessant torrential  rain accompanied by  North wind flattened their cottages on the ground . The farmers began to rebuild their huts except for Ramsharan who had no money to buy materials to make his cottage stand erect . He borrowed money from the upper primary school teacher with high rate of interest . This man is very greedy . He is after Ramsharan’s plot of land which Ramsharan by no means will sell . How will he look after his family if he sells his   land ? Ramsharan cries to himself . That teacher pretends to be a good samaritan and comes forward to help Ramsharan to overcome the hazardous situation . Ramsharan is a typical simple village folk . He could not understand the tricks the teacher played .

A few months later the teacher came to him and demanded money which he lent Ramsharan for re constructing his cottage . His words came to Ramsharan like a bolt from the blue . At the time of lending money the teacher assured him that he would not demand it before a year . It was the mid time of the season .  Crops would take time to ripe . Only ripe crops are sold in the market . After selling crops Ramsharan can earn money to clear his dues . Now , it is next to absurd for him to   reimburse . The teacher did not like to hear anything . He showed no mercy . Ramsharan pleaded him to tarry a little  till the crops are sold . The teacher was adamant . He was not convinced . Being an unkind man the teacher began to force Ramsharan to repay his loan by selling his land to him . Ramsharan cried and cried but tears of his eyes could not melt the stone heart of the usurer . Ultimately , Ramsharan was compelled to sell his land to repay loan .

Now Ramsharan had nothing to make money to feed the family except for the residue left in his hand after clearing his dues . His wife advised him to buy a cow. He did so .  Ramsharan’s wife gave it a   name . Since it was Wednesday , she named the cow after the day . They called her Budhi. The whole family worshipped Budhi as mother following the Hindu rituals  . Put a garland around her neck and coated her forehead with  vermilion . Ramsharan built a shade with mud and thatched roof for the cow .  Ramsharan’s wife used to  feed the cow , clean the cow shade , mix cow dung with ashes and make cow dung cakes . Got them dried and sold in the neighbor hood . Ramsharan milked the cow . Used to sell cow milk . Let loose the cow to graze in the pasture till the sun sets . Budhi  became only source of income of the family .

But his income stopped suddenly . People are getting affected by a deadly disease named Covid 19. Government announced total lockdown. Ramsharan could sell neither milk nor cow dung cakes . His family faced acute hardship . It is said that danger never comes alone . Ramsharan had to face another hurdle , the most difficult one . It came from the government . Schools will remain closed but classes will be conducted on line during pandemic . The teachers will take their classes digitally .

It requires a smart phone or Laptop or computer with internet connection . Ramsharan had no idea about a smart phone . One day he visited the house of the teacher of the primary school . He is truly a decent man . He explained it very lucidly and explicitly . All Ramsharan needs at present is to buy a smart phone  which costs at least seven to eight  thousand .

Where will he get that huge sum of money ? He could not sleep at night . Lost his appetite . Consulted with his wife . Got no interest in day’s work . He was completely shattered . Gradually , he convinced himself that sitting idle is not the solution . There are two things that he can do . Either to stop their education or to buy them a smart phone . He was utterly confused . He should not stop their education . He loves his daughters . They should be educated . Education is must and to give them education he would sell Budhi , mother cow , his last resource . He made up his mind . Nothing can take him away from his decision . He suppressed all his pain and love for Budhi  . He sobbed all through the night . He prayed to god to forgive him for selling his Budhi , the most resourceful member of the family , for the sake of his daughters’ education . He is worthless . He is good for nothing . But he is a proud father . He is proud enough for his   daughters . And he can go to the end to keep them smiling . He must confront and fight every possible adversities to survive but nothing can stop him to buy a smart phone for their education . 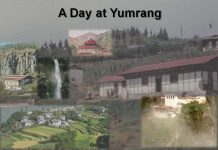