Home Editorial Bhasha Divas: because we love Bengal and its Language

West Bengal today celebrated the beautiful language of Bengali on Bhasha Shahid Divas, International Mother Language Day, to mark the linguistic diversity and richness of this language. The day is observed worldwide for creating awareness of cultural diversity, linguistics and multilingualism.

The divas is celebrated since 2000, it was established as a tribute to those martyred during the Bengali language movement in 1952 at Dhaka. Several programmers were organized across the state to mark the day through an assortment of lectures on Bengali literature and culture. Theater performances and various other events have been organized across the city. A function has been jointly organized by the Kolkata Municipal Corporation (KMC) and the state government at the Deshyapriya Park here this evening. West Bengal Panchayat Minister Subrata Mukherjee and Mayor Sovan Chatterjee along with other renowned faces are being invited at the event. Several non-governmental organizations too observed the Divas through various cultural programmers.

This year the West Bengal chief minister Mamata Banerjee has received an invitation from Sheikh Hasina’s government to participate in the Bhasha Divas celebrations in Dhaka on February 21 as the guest of honor. Political critics have marked this attempt of the Bangladesh as a significant move that will enhance India-Bangladesh ties.

The Chief Minister, Mamata Banerjee recalled that she was the one who took the initiative to start ‘Bhasha Divas’ celebrations in Kolkata when she was a Lok Sabha MP, with money from her MP local area development fund. It has since become an annual feature in Bengal and now the Kolkata Municipal Corporation funds the celebrations of Bhasha Divas in Kolkata, she said.

~ Bhasha Divas: because we love Bengal and its Language ~ 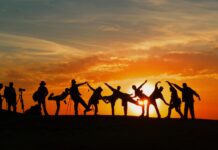